This is a race report that I don’t know exactly how to write. It is uncharted territory for me. Usually, the gist of my race reports is this: the race was wonderful; I had a fabulous time; I would recommend this race to everyone. Well, this race was wonderful; I would recommend this race to everyone, but, I most definitely did not have a fabulous time.

The trip started off well. I traveled to Seattle, Washington with my hubby Bill, who did not run the race, and two running friends Nancy and Amy. There, we met my son and daughter-in-law, who live in Oregon, and did some touristy stuff. We visited the Chihuly Garden and Glass Museum (which I loved) and went to the top of the Space Needle. We ate at one of Bill’s favorite restaurants and he got his pastrami sandwich fix.

The race, a point-to-point, started about an hour east of Seattle at Hyak in Snoqualmie Pass. Bill drove us to the race start, which meant we didn’t have to ride the shuttle bus, always a plus. It was chilly at the start, so we were glad to be able to sit in our car to wait. You can pick up your race bib the day of the marathon, a nice perk.

We had been getting smoke updates from the race director before the race, which was slightly unsettling. You can see the haze from distant forest fires in the background of this photo. Other than a faint smoky odor at the race start, though, the smoke was really not an issue. We posed for this picture, lined up at the starting line, and were off. 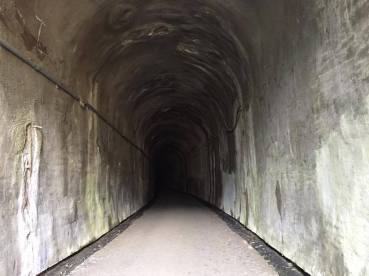 A unique feature of this race is the old railroad tunnel that you run through beginning half a mile into the race. Runners are instructed to wear headlamps or carry a flashlight. The tunnel is almost 2.5 miles long, and it is completely dark inside. I never felt claustrophobic, however. There are hundreds of runners, all wearing lights, going through the tunnel at the same time. You can see the light at the end of the tunnel almost a mile before you reach it, so that gives you a nice point of reference.

I was running with Amy at this point and feeling good. Nancy took off ahead of us at the starting line, and I didn’t see her until the finish. There is a point right after the tunnel where you can drop a bag with your headlamp, long-sleeved shirts, and any other items you want to get rid of. The first aid station is also there. Amy decided to visit the porta-potty at the aid station and I kept going. I knew she would catch up to me eventually.

The race course is entirely on a packed crushed gravel rail trail. It is all a gentle downhill. I have run downhill marathons before, and I find them to be more difficult than flat races. Not this course; it is just enough downhill so you feel like you are having a good day, but not enough to be a quad-shredder. The course is the most beautiful, scenic one I have ever run. There are only several hundred runners in the race; just the perfect size. I was never alone, but it never felt crowded, either.

At about mile four, I began feeling a slight twinge in my hip, which I knew was not a good sign. I have been dealing with a hip injury for over a year. It began last June (2017) when I visited my son and his family in Steamboat Springs, CO. It had been very gradually improving, but I did an 18-mile training run with Nancy three weeks before the race, which caused it to hurt a lot. 10 days before the race, I tried a 13-miler, which was even worse, then six days pre-race I attempted a six-miler, which did not go well either. In between runs, I applied heat, foam-rolled, did my prescribed strengthening exercises, and crossed my fingers.

By mile eight of the race, the pain in my hip was intense, and by mile 11, I could no longer run, so I started walking. I wanted to do a run/walk at this point, but I was afraid of not being able to finish at all, so I tried for a brisk walking pace. Amy caught up to me at mile 16, and we walked together for a brief time, but I soon needed a pit stop, and she kept going.

Bike riding volunteers passed me several times, asking if I was alright. I gave them the thumbs up sign and kept walking. I did not feel too discouraged until about mile 20. By this time, even walking caused my hip to hurt. I couldn’t decide whether it hurt more to walk or run, so I did a little of both. As I could barely lift my left leg, my gait consisted of running with my right leg, and sort of shuffling my left leg along the ground in a rolling motion, then repeating the action over and over and over… It was a slow process.

I finally finished the marathon, collected my shirt, medal and pin, all of which are awesome, and got to sit down. Bill was there, and he got me a little food, but I really wasn’t very hungry. I was in a lot of pain and very glad to be finished. My race time was an hour slower than my previous slowest marathon time.

I am now in the process of visiting medical professionals to try to rehabilitate my hip. My friends Nancy and Amy are great inspirations for me. Nancy is a very good runner, but she battled injuries for years until finally getting a Boston Qualifying time again at this race. Amy had not run a marathon in almost three years due to injuries, and she ran this race much faster than she expected. When I look at them, I can say with confidence, “I will be back.”

I would definitely recommend this race to anyone considering a marathon. I have nothing negative to say about the race. The communication from the race director was good, the amenities were fine, the logistics were easy, the support was fantastic, and the course was spectacular. This was the prettiest, easiest marathon course I have ever run. The tunnel, while not my favorite part of the course, was a novelty that I was glad to have experienced.

When my hip is better, I am coming for you again, Tunnel Vision Marathon!

I am linking up with Running on Happy and Fairytales and Fitness for their Friday 5, Shank You Very Much for her Dream Team, and Holly from HoHo Runs and Wendy from Taking the Long Way Home for their Weekly Wrap.