Since I am once again joining the ranks of the running, I decided to participate in the Weekly Wrap with Holly from HoHo Runs and Wendy from Taking the Long Way Home.

For those of you who don’t know my story, I have been dealing with a hip injury for over a year. I was getting much better until I did the Tunnel Vision Marathon in August when the injury flared up again. After the marathon, I was not running at all, which is not good, since I have the Marine Corps Marathon on my schedule at the end of this month. I did the elliptical to stay fit and began running on the road again after my trip to Cinque Terre in September.

My week began with a short run with my hubby around our little town. Even though my training log says we walked a few times, our pace was still the fastest I have run since my injury. To tell the truth, we are a little bit competitive, and I was just trying to keep up with him!

Monday was Columbus Day, which means no school, so I ran with one of my teacher friends. She is very speedy and has also come back from an injury similar to mine. I am inspired by this friend in many ways, and the run was good for me. We talked the entire time. Actually, I talked for the first part of the run, then she talked for the last part when I was out of breath. Our pace was faster than my new normal but much slower than my pre-injury pace. I was grateful that my friend slowed down enough to run with me.

Tuesday, I was back to running solo. I did a slow 8-miler from the rec center, taking plenty of walk breaks and enjoying the scenery on a rail trail outside of town. It was still hot and humid, but this route takes me past a water fountain twice, so I don’t have to carry water. Wednesday was another slow, short run around town, and I rested on Thursday. 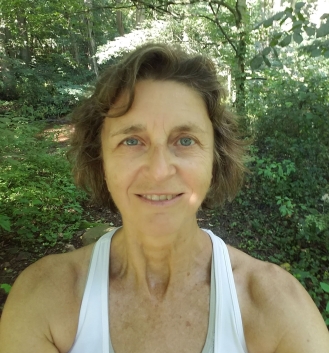 Then came Friday. My moment of truth. I had planned to try one really long run before the Marine Corps Marathon. My goal was to balance the need to increase my endurance with the need to baby my hip. I decided to start with one hour of elliptical training, followed by three hours on the road.

The hour of elliptical running went by slowly. I watched sitcoms on the monitor, but I find indoor training boring. The machine showed that I did a little over 7 miles during the hour (not sure how that is calculated). I grabbed my belt where I had stashed a PB&J, some dried apricots, and very salty almonds, and happily left the gym behind to set out on the road.

I decided to break down the three hours into three loops. This helps me mentally and allows me to not carry water since I can stop at strategically located water fountains during each loop. I began the first loop walking, eating half of my sandwich. After the sandwich, I settled into a very slow walk/run pace. I followed my favorite running route out in the countryside and finished the first loop feeling strong.

At the end of the first loop, I ate some almonds, got a drink, and set out for my second loop. I still maintained the same slow, walk/run pace, which took me on the rail trail I ran on Tuesday. Fall temperatures finally came to southeastern PA on Friday, which is why I planned the long run for this day. I finished my second loop feeling tired, but still good.

When I set out for my third loop, I only had about another half hour to go. I had been running for three and a half hours at that point. There is a little neighborhood near the rec center, and I decided to do my final loop there. My pace, while slow, had not significantly changed from the first loop. When I returned to the rec center, I had been running for four hours and two minutes, a total of almost 22 miles.

My weekly total was 42 miles. Not a lot for my biggest pre-marathon week, but it felt like a victory. My hip is a little sore, but much, much better than it was last month. I rewarded myself with a glass of chocolate milk and took a long hot shower.

I did no yoga, swimming, or Body Pump this week. My focus was on running. I did continue with my pushup challenge, where I am up to 11 pushups from my toes, followed by another 11 from my knees (I know, pretty wimpy) and my plank challenge, where I can hold a forearm plank for three and a half minutes. 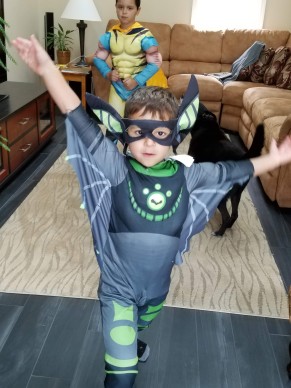 My best exercise of the week was babysitting two of my grandsons. We tried out some Halloween costumes and played dress up, 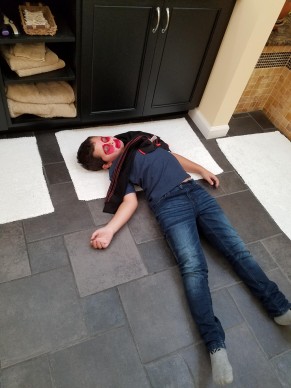 set up the tent in the family room and drew some pictures inside of it,

and rode scooters in the driveway. Mimi and Abo were both exhausted after all of that and needed dinner at a restaurant with an adult beverage to recover. My marathon training is complete.

I am linking up with Clean Eats Fast Feets for her Week in Review, Shank You Very Much for Global Blogging, Random-osity for The Good, The Random, The Fun, Patty, Erika and Marcia for Tuesdays on the Run, Running on Happy, Crazy Running Girl, and Coach Debbie Runs  for Coaches’ Corner, Nicole and Annmarie for Wild Workout Wednesday, and blovedboston for Weekending.