The Hellbender Half Marathon

For those of you who are not herpetology experts, a Hellbender is a salamander, in fact, it is the state amphibian of Pennsylvania. Hellbenders exist only in clean, fast-flowing waterways.

The Hellbender Half Marathon (and an associated 5K) is held in Weiser State Forest in  Central Pennsylvania to raise funds for the Roaring Creek Valley Conservation Association, which promotes clean water in the state forest and the surrounding Roaring Creek Valley, thus the name of the race.

I traveled an hour north of my house early last Sunday morning with a friend and my hubby Bill to run this race. Bill and I ran it before, in 2017, then the race went on hiatus last year. When we heard it was back on this year, we signed up in a heartbeat before it sold out (and it did sell out).

Due to a miscalculation on my part of how long it would take to travel to Weiser State Forest, we arrived early (you’re welcome) and had plenty of time to get our bibs and long-sleeved blue cotton T-shirts.

My friend and I are huge fans of cotton T’s. We both have plenty of tech shirts to run in from participating in other races and don’t like to wear them for non-running activities. A cotton T-shirt, and one in a pretty color to boot, was definitely welcome.

We visited the porta-potties, drank a little water, I ate a handful of salted almonds and dried apricots (my go-to pre-race food), and watched the early starters begin the race.

At exactly 8:30 we lined up at the starting line and were off, running through the woods on a wide dirt path. Bill and I decided to run together in this race. Our speedy friend was out of sight in no time.

The path we were on was fairly flat at some places and gently rolling in others. Bill and I both thought there were more downhills than uphills for the first miles of the race, and I made a mental note to save something for the end of the out-and-back course, reasoning the end of the race would be mostly uphill.

One very nice feature of the course was that it was 90% shaded, a much-needed perk on this very hot and humid morning.

When I typically train for a half marathon, I like to do some long runs of between 15 – 17 miles. Before this race, however, the longest run we did in training was just over 13 miles. We also had not done a training run longer than four miles in the month before the race, due to our traveling schedule.

I was slightly nervous about this lack of training, but I always figure that walking is an option, so I was not too concerned about finishing the race. Between mile three and four, though, I reevaluated my level of concern. I was tired. Very tired. Struggling at mile 3.5 of a 13-mile race is not good.

I told Bill I needed to take a walk break to try to collect myself. We walked through a water stop, where I drank a full cup of water, then rinsed my mouth with some Gatorade. It worked somewhat; I was able to run again, but my lack of training was evident and Bill (bless him) had to pull me along to the halfway point, which was the turnaround, where we walked through another aid station. 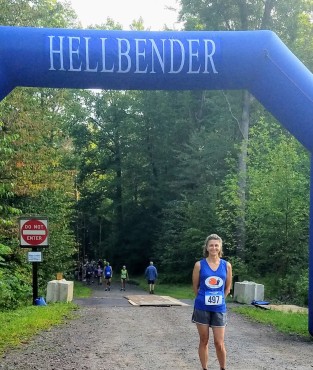 I was slightly apprehensive about tackling the mostly uphill portion of the course, but the area near the turnaround was flat, so I decided to enjoy the mile I was in. We were around mile seven when something clicked. It felt as if I remembered how to run.

I leaned slightly forward, pushed off with the balls of my feet, and picked up the pace. “What got into you?” Bill asked me. I couldn’t tell him. I felt great, like I had just gotten my second wind. Or in this case, my first wind, since I was pretty miserable on the way out.

We took a few walk breaks, but I no longer had anxiety about finishing the race. In fact, when Bill told me, as we passed the mile marker for the 11th mile, that he wanted to try to finish in under 2 1/2 hours, I was puzzled. I looked at my watch for the first time: our time was 1:48. I was wondering if there was something he wasn’t telling me.

I was also surprised that the uphill I was dreading for the final miles never materialized. The course seemed downhill going in this direction too. Yes, we found an out-and-back half marathon course which was downhill in both directions!

The final two miles were mostly a run/walk, but we finished in 2:12, a time I was pleased with, especially considering the heat and humidity.

After we were handed medals and a cold bottles of water by volunteers, we found our friend who had finished much earlier, and we all ambled over to the food tables, where a spread much more like post-trail race food than post-road race food (that is to say, plentiful and good) waited for us. 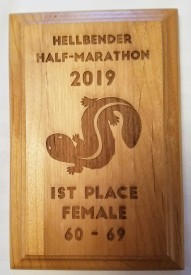 The award ceremony began in a timely manner and I learned that I had won my age group (Bonus: I was not the only woman in the race in my age bracket).

Bill and I cleaned up as best we could in the state park bathrooms, changed out of our completely soaked running clothes, and made the six-hour drive to meet friends in Boston for a short vacation after the race sans showers.

I would enthusiastically recommend this fairly small (capped at 325 runners) race to anyone. The price is extremely reasonable, the course is a pretty, gently rolling, mostly shaded dirt path through the woods, the T-shirts, medals, and awards are all top-notch, and the post-race food is plentiful and tasty. It checks all the necessary boxes. I will definitely be back next year.

I am linking up with Running on the Fly and Confessions of a Mother Runner for their Weekly Rundown and Kooky Runner for Tuesday Topics.