How to (Not) Train While Traveling 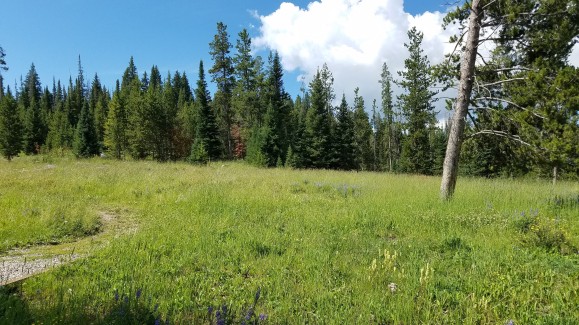 My hubby Bill and I have been traveling for over two weeks. Readers of this blog know that, while we did run often while visiting my oldest son and his family in Colorado, we did not run far.

Looking back over my training log for last week, I see that we did run six out of the seven days, but our total mileage was only 18.7 miles.

Oh, we had plenty of excuses. The high altitude and lack of oxygen made running longer distances much more difficult than at home. We had a short window of opportunity to run in the morning before our son and daughter-in-law went to work so that we could be back in time to babysit our grandson. There was a bear in the area. We wanted to spend time with family rather than running.

When we get to Oregon to visit our middle son and his wife, I reasoned, we will run more often. The altitude is similar to that of our Pennsylvania home, they have no children, and, since they both teach at the university and have summers off, the schedule will be more flexible.

Our first stop in Oregon after being picked up at the Portland airport was the town of Hood River in the Columbia River Gorge. Hood River is a mecca for outdoor sports.

The mountains on either side of the Columbia River act as a funnel for air rushing inland from the sea, so there is a perpetual wind blowing from the West. The bright spots of color in the photo above are kiteboarders and windsurfers playing on the river.

We did run on a path along the Columbia River once while we were in town, and we hiked to two beautiful waterfalls, but running definitely was not a priority.

The photo above is of Tamanawas Falls near Mount Hood.

Here we are at Horsetail Falls in the Columbia Gorge.

When we get to my son and daughter-in-law’s house in Corvallis, I thought, we will definitely run more often

We have run once so far in Corvallis. Part of the run was on this beautiful little trail through the woods.

We have done more hiking around Corvallis and saw this sign while on a hike yesterday: 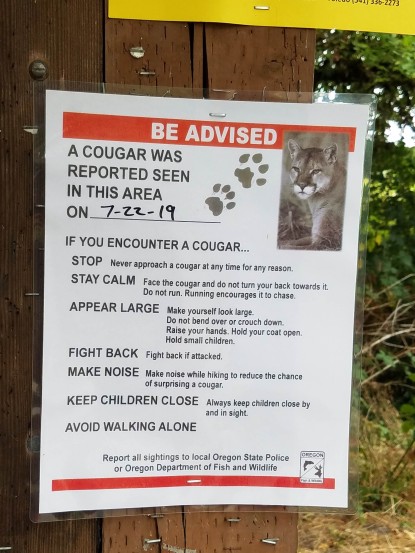 Yes, a cougar was seen in the area. After the bear scare in Colorado, I don’t want to encounter a cougar while out on a run. I am more afraid of cougars than bears.

The first tip for what to do if you see a cougar seems completely unnecessary: “Never approach a cougar at any time for any reason.” Really?  And, “Stay calm.” I think not.

Bill and I ran a local 5K on Saturday (race report to follow) but it looks like our total miles for the week will be well under 20.

I guess they will be slow races. Walking is always an option. Besides, there is a wine tasting tour happening later today. The Willamette Valley, where Corvallis is located, is known for their Pinot Noirs.

Time with our family is a higher priority than training and I want to take advantage of every available minute. Even if that means sipping a little wine rather than lacing up my running shoes.

I am linking up with Running on the Fly and Confessions of a Mother Runner for their Weekly Rundown, Shank You Very Much for Global Blogging, Random-osity for The Good, The Random, The Fun, Esme Salon for Senior Salon, and My Random Musings for Anything Goes.