My hubby Bill and I traveled to Harrisburg, PA on Saturday morning to run the Central PA 10K. The one-mile fun run associated with the 10K race was named “The MIlkshake Mile” because all participants in both races received a world-famous (OK, maybe just state-wide famous) Farm Show milkshake after the race.

We arrived early, parked close to the starting line and registration table, and picked up our race packets without a hitch, then returned to our car to pin on our bibs and relax before the race.  I noted the race shirt was the soft cotton-like material that I like.

10 minutes before the start of the race, we ambled over to the starting line and found a good space in the crowd of runners waiting for the race to begin.  Bill said “Let’s move up a little bit, ” eyeing a woman ahead of us who looked to be about my age, and we moved forward a few paces.

At 9:00, the horn blew and we were off. The race started on the campus of a community college, so the beginning of the race course wound through a parking lot, then out onto a paved bike path which is part of the Capital Area Greenbelt.

The bike path was completely flat and the racers soon thinned out, so running was easy at this point. I had a race plan of running “comfortably hard“, and I was cruising for the first mile and a half. 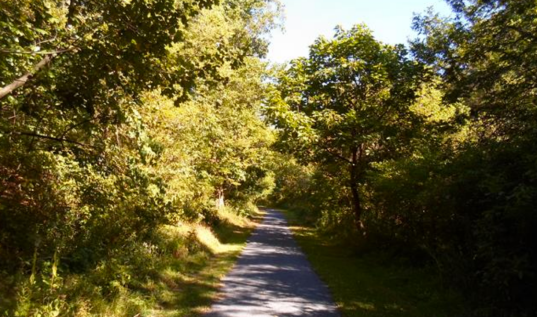 Then we got to Wildwood Park and the hills. The hills were not killers, but they were pretty steep rollers. It seemed to me like everything in the park was either up or down, no level ground to be found. I started walking up some of the uphills. The woman we moved in front of at the starting line because we didn’t want to be stuck behind a slowpoke passed me.

I am a pretty good downhill runner, so I always made up time on the downhills, but I slowed on the uphills. Time to add some hill repeats to my training.

After over two miles of running the rolling hills of Wildwood Park, we came out onto a flat gravel path. I like races run on a variety of surfaces, so the gravel path was very welcome and I was glad to be finished with the hills.

I accelerated slightly and gradually picked off runners ahead of me one at a time, but not the woman whom I thought was in my age group, although I could see her ahead of me. 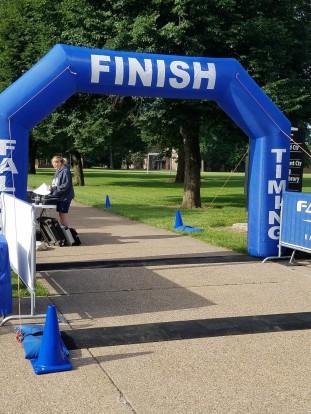 We eventually returned to the paved bike path and made our way back to the community college, where the finish line awaited.

I was surprised to learn that I had finished with a pace under 9:00 minutes/mile (my goal), even with all the walk breaks on the uphills. Better yet, I beat my time for a 10K I ran earlier in the spring, which had a much easier course, by over a minute.

But I could not catch the woman we moved in front of at the starting line.

After quickly changing into some dry clothes, we moved on to the after-party. There were vendors handing out free samples of various products, games of chance, a DJ playing loud, bouncy music, and, best of all, the milkshake booth.

The post-race food included soft pretzels, which I always like after a race, so Hubs and I got soft pretzels and milkshakes and strolled around waiting for the awards ceremony to begin. 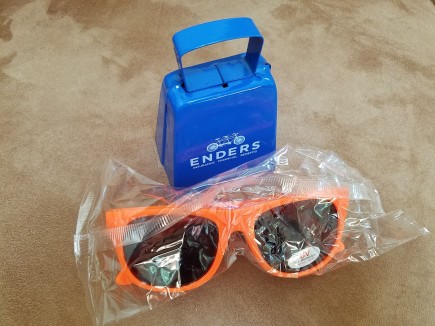 …and picked up some free Teavana samples. 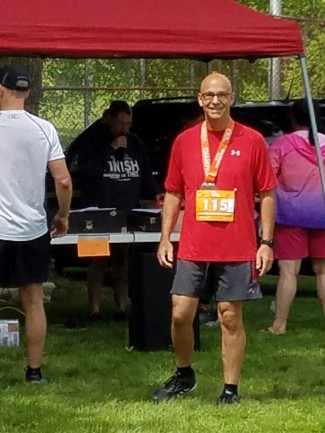 At the awards ceremony, we found out that Bill won third place in his age group. 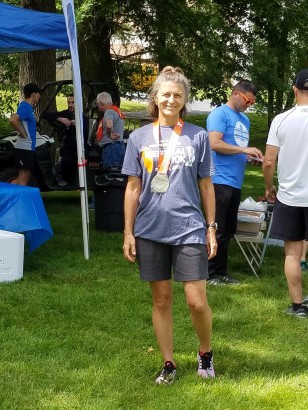 And I was very surprised to learn that the woman I couldn’t catch was actually two age groups younger than me (which she won). I wound up placing first in my age group.

This race was organized by the people at the Harrisburg Area YMCA, who always have excellent races. Even though it was the first year for this particular race, the people who put it on are pros who know what they are doing.

I would definitely recommend this race to anyone. The course is interesting, the price is reasonable, the organization is top-notch, the shirts are very nice, and the post-race party is happening.

Who doesn’t love a race that ends in milkshakes and soft pretzels?

I am linking up with Running on the Fly and Confessions of a Mother Runner for their Weekly Rundown, Coach Debbie Runs for Coaches’ Corner, and Kooky Runner for Tuesday Topics.