As protests continue in the United States over the killing of George Floyd in police hands, I, along with most of the country, have been thinking about racial justice, reconciliation, and how to move forward.

Today, I am writing two personal stories and one observation. My thoughts on the topic today.

I may not have the same thoughts tomorrow and that’s OK. Change is good and thoughts evolve. Buckle up. 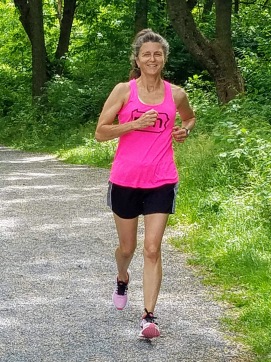 Readers of my blog know I have been struggling with long runs recently.

Physically, I feel fine, but somewhere along the way, I begin to feel hopeless and break down in tears.

My long run on Monday, however, was going well. I had gotten past the point in the run where I begin to feel shaky and was running on a bike path, heading for home.

During the pandemic, there have often been chalk drawings on the path – hopscotch, pictures of flowers, an inspiring message.

Monday, I read this phrase, printed in all capital letters: “SAY THEIR NAMES”.

As I continued down the path, every three feet or so a name was printed.

And on and on.

For half a mile.

All were unarmed citizens killed by the police.

As I read name after name, a lump formed in my throat. The more names I read, the larger the lump grew until I could not breathe.

I stopped as the tears flowed.

Each one of those names represents a person, a real flesh-and-blood human being, whose life was tragically cut short.

Someone must have spent hours on their knees writing their names, in tribute and acknowledgment.

What have I done? Not much.

I have not had many interactions with the police in my life. I have gotten one speeding ticket, which I deserved (77 mph in a 55 zone) and the policeman who gave it to me was polite and professional.

That changed a few years ago on Saint Patrick’s Day, a Saturday and also my grandson’s birthday, as we were headed to his party.

It was early afternoon. We had just gotten off the highway and entered the flow of traffic on a busy two-lane state road when I noticed the car in front of us behaving strangely.

It was weaving from one side of our lane to the other, speeding up, then slowing down.

“I believe the driver of that car is drunk,” I told my husband. “I’m calling the police.”

Just then, at a stoplight, he opened his car door, leaned out, and threw up.

I gave the dispatcher our location and a description of the car along with the license plate number. She told me help was on the way and kept me on the line.

Just then, the car swerved into oncoming traffic and I exclaimed, “Oh no! Oh no!”

Luckily, cars coming the other way were able to avoid a collision by moving over to the shoulder of the road.

After the near-miss, the driver of the car ahead of us stepped on the gas and disappeared from sight but I could hear sirens coming from behind.

When we got to the next stoplight, two police cars had the driver boxed in and were approaching the car.

I eventually had to give a written statement and found out the man was convicted of drunk driving. His blood-alcohol content was more than three times the legal limit.

As the policemen approached the car, I realized immediately how brave they were.

I would imagine, as arrests go, this one was pretty ordinary. It was made during the daylight, plenty of people were around, there was no violence, anger, or bloodshed.

But those policemen (and policewomen) never know what danger may be lurking in a seemingly benign stop.

Nevertheless, they approach the car. Every day. I couldn’t do it.

One body with many parts

If you read social media these days, You may get the impression that either police are a bunch of power-drunk bullies or protestors are out-of-control anarchists, depending on whose posts you read. Memes abound.

Neither of these characterizations is true.

And both are true.

Champions of the police must admit that there are some policemen who could benefit from conflict-resolution training with some anger-management classes thrown in for good measure.

Those who sympathize with the protestors must acknowledge that some of the protests have devolved into looting and chaos, which do not promote the message of racial justice and reconciliation.

We need to talk to each other as people, not caricatures. We must recognize each other’s humanity.

And we need to do it now.

Our country, maybe even our lives, depends on it.

“There is one body, but it has many parts. But all its many parts make up one body… It didn’t matter whether we were Jews or Gentiles, slaves or free people. We were all given the same Spirit to drink.” 1 Corinthians 12:12 – 13