Rules Are Made To Be Broken 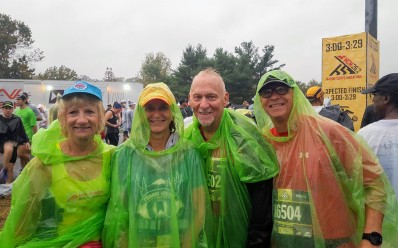 I have some rules I live by.

I’m not talking big stuff here, although I do have rules for the big stuff too.

One example is that I don’t do the same marathon twice. There are a lot of wonderful, interesting races out there. I have limited time and energy. I want to sample as many different venues as possible.

Of course, rules are made to be broken.

Another rule is I never get involved in social media discussions.

I learned the hard way.

They get nasty too quickly.

Most people don’t really want to have a discussion anyway. They want to hear echos of their own views to reinforce pet prejudices and shore up shaky confidence.

I almost broke that rule one day last week.

A friend of mine had posted this beautiful, poignant essay, written by a black mother worried about her son growing up in America.

Let me see…this essay was written after Ahmaud Arbery was chased, then gunned down by white men who were alarmed because he was jogging in their neighborhood in South Georgia, after a white woman called the police to report Christian Cooper, a black man birdwatching in Central Park, when he asked her to leash her dog (at an area of the park where all dogs were supposed to be leashed), but before George Floyd was killed in police custody when between one and three police officers knelt on his neck despite repeated protests he could not breathe.

I am worried about her son too.

I am the mother of three sons, all of whom are precious to me. Of course, this mother’s son is precious to her.

My sons, however, benefit from white privilege, while hers does not.

I’m not crazy about the term “white privilege“, even though I understand the concept and believe in its truth.

It conjures up images of my sons growing up in a mansion with butlers and maids, pampered and spoiled, when nothing could be further from the truth.

When my boys were young, especially the older two, we were poor. I mean qualifying -for-government-benefits poor.

White privilege doesn’t mean your life hasn’t been without struggles; it means those struggles weren’t brought about by the color of your skin.

How long, the author asks, before her eight-year-old son goes from being perceived as cute to being looked at as a threat?

Is there any wonder that cities are now exploding, protests turning violent, and property being destroyed?

Resentment, anger, and frustration at decades, no, centuries of injustice are boiling over. Again.

The country is already brittle, suffering from the last two months of anxiety and isolation caused by the pandemic. The incident with George Floyd was the spark needed to set fire to the dry tinder already in place.

Last week, in a post where I referenced armed protestors who marched to demand the opening of the country from constraints in place due to the Coronavirus, I called for grace and understanding for those protestors.

“Fear and sadness can look like anger on some people,” I said.

I’m saying it again this week in reference to a different set of protestors.

I am not condoning violence or hate in any way, but I can recall being so enraged I wanted to hurl a plate to the floor just to hear the satisfying crash of destruction.

And my rule about not getting into a discussion on Facebook?

After I read the article which so touchingly described the black mother’s concerns for her son, I read a response, which I will paraphrase here: “Meh! She seems like an angry person to me. Angry at the world.”

Tears sprung to my eyes and my foot began tapping, sure signs I am seething.

I took my dog, Benji, for a walk to calm down and organize my thoughts.

“I should let it go,” I thought. I have the rule about not getting into social media discussions for good reasons. Nothing beneficial could come from confronting the woman on Facebook who dismissed the writer as “angry“.

Then I had another thought: “What if by not responding, I am tacitly agreeing with this commenter?”

If we don’t confront racism, are we implicitly guilty?

Righteous indignation rising, I resolved to respond to the comment, but my friend, who had originally posted the article, saved me.

By the time I returned from my walk, she had taken the offensive comments down.

A blogger I follow wrote a post last week about racial injustice. At the end of the post, he stated “I don’t know what I can do (to help)“. I think a lot of us feel that way.

What can one person do?

Fortunately, there are some ideas. Here are 75 things you can do to help combat racism.

Don’t allow hate to infiltrate your heart or your social media pages.

At the end of his letter to the Corinthians, Paul tells us, “Trust steadily in God, hope unswervingly, love extravagantly. And the best of the three is love.”

Live your life in search of love, promoting love, believing in love.

We need it. More than ever.