Three Days In May

“Running won’t solve all your problems. But then again, neither will housework.”

I have written here about my recent running struggles. Long runs are especially troublesome.

One day a few weeks ago, I was browsing social media, looking for some inspiration, when I came across some posts about a 4x4x48 Challenge.

Intrigued, I researched it.

Apparently, this running challenge, the brainchild of former Navy SEAL and endurance athlete David Goggins, has been around for several years. It has recently gained popularity due to the cancelation of all real-life races.

In this challenge, I read, you run four miles every four hours for 48 hours. A total of 48 miles.

That’s insane, I thought. Who would do that?

If you believe everything you read on Twitter, apparently a lot of young, macho, Navy SEAL-type guys with hashtags like #stayhard and #canthurtme.

I thought about doing a scaled-back version, maybe 24 hours rather than 48, then put it out of my mind.

Until my friend, Nancy called.

Now, I will not say Nancy has been the instigator of every crazy thing I do, but she has been instrumental in a lot of them.

“Have you ever heard of the 4x4x48 Challenge?” she asked.

All of a sudden, I did want to do it. Wild horses couldn’t keep me from participating.

I needed something bold, something audacious, something to shake me out of my funk. And I wanted to do it immediately, which, as it turns out, suited Nancy.

She planned to begin the challenge on Friday, six days from our initial conversation, with two other running friends, practicing social distancing, of course.

The problem was, I live a 50-minute drive away from Nancy and our other two friends. I could not picture myself making that drive twice every four hours, in addition to running four miles. I also could not stay at Nancy’s house for obvious reasons. Logistically, it seemed impossible.

I thought about it, then called her back. “OK“, I told her, “I can’t run with you. I am going to run by myself, here, at my house. We can keep in touch during the challenge and encourage each other.”

And that was my plan.

I have to admit, the thought of running by myself in the middle of the night was not appealing, but I didn’t think my husband and running partner Bill would want to do the challenge.

As it turns out, he didn’t want to do the challenge, but he didn’t want me running by myself in the middle of the night more, so at the last minute, he agreed to run with me for the first 24 hours. 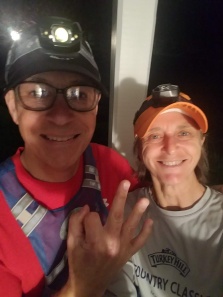 At 2:00 Friday afternoon, we set out on our first run, full of excitement, energy, and high expectations. I had to tell Bill several times to slow down. “We are going to be running a lot of miles,” I reminded him.

We finished the first run in the 10-minute/mile range and returned home to get something to eat.

At 10:00 p.m., we had our first taste of running in the dark, definitely not something I love, and our pace slowed to 11-minutes/mile.

Saturday, I thought, would be the make-or-break day for us. With six runs on the schedule, the first one at 2:00 a.m., Saturday threatened to be a grueling day.

While getting up at 1:45 a.m. to run at 2:00 a.m. wasn’t especially fun, we completed runs four through nine without issue. We had four different four-mile loops we alternated between, depending on our mood and conditions.

Our pace remained steady at right around 11 minutes/mile, our spirits remained high, and, best of all, Bill decided to run all 12 runs with me, rather than only the first 6 as he originally planned.

All I did that day was run, eat, and sleep. I know, you’re thinking “Perfect day,” right? 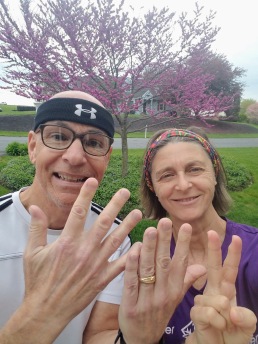 And then Sunday happened.

When we woke up for our 2:00 a.m. run, it was raining. We had already run 36 miles with 12 miles left to go, and we were a little hesitant to step out into a dark, rainy night.

To make matters worse, Bill checked on the radar and an angry red-and-orange-colored blob was bearing down on us. While I typically don’t mind running in the rain, thunderstorms are another matter.

We made the decision to postpone our run for an hour, reset the alarm, and tried to get another 45 minutes of sleep.

When the alarm woke us, the worst rain had passed and we completed the run, our last middle-of-the-night foray.

We woke for our next run after only two hours rest, rather than the usual three. My stomach was upset and I couldn’t eat before leaving the house.

I stumbled through our 11th run after a 12-hour fast, and definitely felt the lack of fuel. Our pace dropped to 12 minutes/mile.

At 10:00 on Sunday morning, after forcing myself to eat some breakfast, we headed out for our final run. My belly was protesting, my legs were shredded, and I was in dire need of some uninterrupted sleep but there was no way I was not going to complete this last leg of the challenge.

Surprisingly, the pace for our final run dropped again to the 11-minute/mile range. Even though I had to compel myself to eat, fueling up was the right decision.

We stepped onto our front porch, exhausted, happy, and ready to celebrate with the beer and guacamole I had been fantasizing about for two days.

We took long, hot showers, then called our friends who also completed the challenge to swap congratulations and war stories.

Sometimes I need a powerful reminder I can do hard things.

And laundry. Running 12 times over 48 hours produces a mountain of laundry. As it turns out, even runners have to do housework.