Time For a Double Vanilla Latte With Extra Whipped Cream 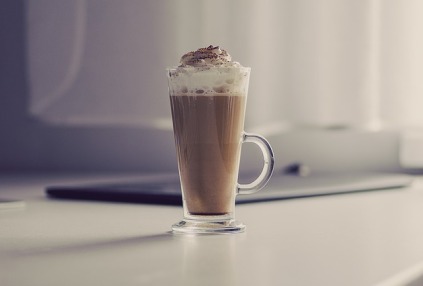 Hello and welcome to the March edition of The Ultimate Coffee Date with Coco from Running With Perseverance and Deborah from Confessions of a Mother Runner, where we dish over coffee (or tea, if that is your preference) about all things running (and some non-running topics too).

This month, if we were having coffee, I would tell you I finally had blood drawn for my cholesterol check.

At my annual physical last year, the blood test showed sky-high cholesterol levels. This is nothing new. My good cholesterol is sky-high and that pushes the overall number up. For the first time, however, my doctor said I may want to consider taking a statin to bring the numbers down.

I asked her whether I could try to lower the cholesterol levels through diet before I began taking medication and she agreed.

I started by eliminating foods with high saturated fat and cholesterol content, which seemed logical. After talking to a friend, however, with some knowledge on the topic, I added some “good” fat back into my diet and eliminated processed sugar.

I had no idea how difficult it would be. Not only were cakes, pies, sweetened drinks, donuts, and ice cream now forbidden, almost all ready-to-eat cereals, some salad dressings, catsup, and even pickles contained sugar (or even worse, high-fructose corn syrup).

I became a label-reading champ.

I did cheat occasionally, but in the weeks leading up to the blood test, I became a fanatic about avoiding sugar and other sweeteners.

Some of my favorite running-related memories are of the times my hubby bought a double vanilla latte with extra whipped cream as a warm, creamy, sweet treat for me after tough long runs in the wintertime.

This winter, I have been doing the long runs, but not getting my favorite post-run indulgence. I have decided to treat myself to one of these lattes now that the blood test is in the rear-view mirror.

The test results are still not known, by the way.

If we were having coffee, I would tell you about my youngest son, who has started running. I wrote about it in this post.

He is doing everything right – posting about his runs on social media to stay accountable, gradually building his running time and reducing his walking time, and finding a group of friends to run with.

I wanted to encourage him in this endeavor (picture Darth Vadar saying “Yesss….come to the dark side, Luke!“), so I offered to buy him running shoes.

We went to our local running store and a very helpful salesman helped him select a pair of Asics.

When I asked him how his first run in new shoes went, he told me his feet hurt. As it turns out, he has very low arches and he was used to running in a pair of basketball-type shoes with no support at all. The support under his arches will take some getting used to but will be so worth it in the long run (no pun intended).

My husband advised him to wear the new shoes around the house to break them in a little bit and my son now reports that his feet feel much better while running in them.

We have signed up for his first 5K in May. Race report to follow!

If we were having coffee, I would show you this “before” photo of my training log and then… 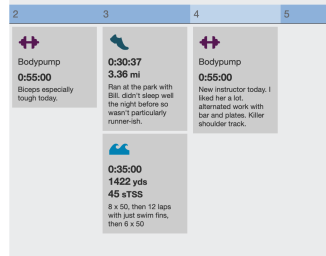 I have decided to record all of my workouts in my training log rather than just my runs. I am putting Body Pump and swimming workouts in there too. I am still not convinced to add the planking and/or push-up routine I do every morning, though.

I don’t know why I switched. Maybe it’s to keep myself accountable, maybe it’s to give me more reasons to pat myself on the back, maybe it’s so I can look back on the log to see what works and what doesn’t work. No one sees my training log except me, so it’s not as if I am sharing it on social media.

Unless…maybe that’s the next step – sharing my workouts on Twitter and Facebook. Could I finally become part of the 21st Century? Baby steps.

Thank you for joining me for our Coffee Date. I will not be participating in the Ultimate Coffee Date next month. Bill and I will be traveling and I will not have access to my laptop. See you again at the beginning of May for more coffee and conversation.