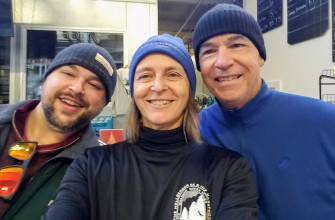 A few months ago, I wrote a post describing a race Bill and I did. We were accompanied to that race by our youngest son.

The race originated and ended at a brewery. That may have been the feature that enticed our son to come along. Other than the opportunity to spend the day with his very cool parents, of course.

Now this son is starting to do some runs himself and to post about them on social media. He uses hashtags like #notarunner, #mylegshurt, and #runningsucks.

He and some of his friends at work, experienced runners and other beginners too, have organized a weekly group run, which I believe is an excellent idea. Nothing like peer pressure to hold you accountable when you are starting a new habit.

I told my son that one day, if he sticks with it, he will be running and suddenly, he will be thunderstruck by a thought that, unbidden, will explode to fill every nook and cranny of his brain. That thought will be “Hey! This doesn’t suck.”

Even though every run before that day might be torture, gradually, so incrementally that he may not notice it, each run will be a little less torturous than the one before.

If he persists, he could even get to the place where he can’t imagine not running. He may get restless on his rest days and think “It wouldn’t hurt to go out and do just a couple of miles, maybe three, four at most.”

In honor of this new running endeavor, I have collected three quotes, words of wisdom to sum up my feelings about running. 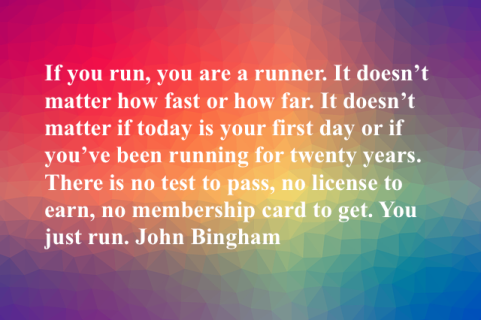 Running is one of the most accessible activities. You don’t need any special talent. There is no minimum speed. You don’t need to gather a bunch of people together to practice. You just put one foot in front of the other and repeat.

Before attending running club for the first time, I was slightly intimidated. I was already an older runner and didn’t know a soul in the club.

I worried that all the members might look like they just stepped out of a Nike ad, with strong, lithe bodies, sprinting ahead of me while I plodded along, alone, trying not to get lost. A self-pity party loomed.

What I encountered was a friendly, diverse group of all ages, abilities, and body types. I immediately began chatting with some women who looked to be about my age. That conversation has been ongoing for 15 years.

The cardinal rule for our weekly trail runs is that no one gets dropped (left behind). Ever.

Most runners are encouraging, inclusive, and enthusiastic about sharing our sport with others.

2. You will make mistakes. Learn from them. 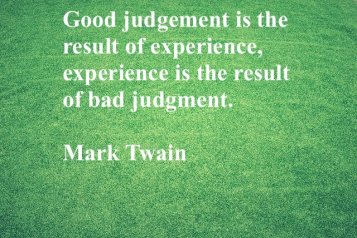 Most runners will admit with regret the mornings at zero dark-thirty that they opted for the safety of the treadmill when they could have ventured outside or the times they slipped on black ice when they should have run on the treadmill.

We are human. We make mistakes. The important thing is to learn from those mistakes so we don’t repeat them.

Running teaches us not to fear failure.

Failures have made you into the unique person you are. You cannot live a full life without some stumbles.

Embrace them. Overcoming mistakes teaches us to accept our flawed, imperfect, wonderful selves, weaknesses, warts and all.

Through running, we learn to accept responsibility for our failures, forgive ourselves, forego shame, and move on.

3.  Running teaches us to tie knots. 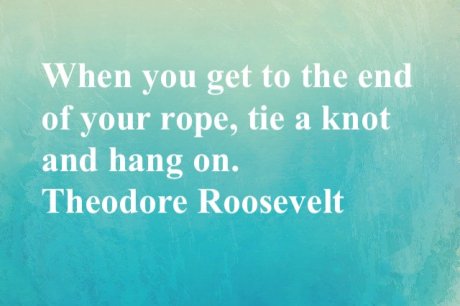 Running teaches us grit and lots of it.

There will be days when you don’t feel like pulling on your running shoes.

There will be gray, drizzly, bitter cold, hot and humid, sunny, scorching, snowy, sleety, foggy days when you will be tempted to bag it and eat chips on the couch instead.

There will be days when you are tired, depressed, worn out, drained, brain-dead, and beaten. The last thing you will want to do is exert yourself. The thought of putting one foot in front of the other over and over and over again, thousands and thousands of times will make your head feel like exploding.

You will think you can’t do it.

Then you will put your running shoes on.

You will step outside and, more from rote muscle memory than anything else, you will start running.

And the clouds will part, the sun will shine, the birds will start singing, woodland creatures will begin following you, angels will sing the Hallelujah chorus, and you will feel more alive than you have ever felt before.

And then you will know in your heart what has been true since the very first time you laced up those running shoes.

You are a runner.