What Is It That You Would Leave Out? 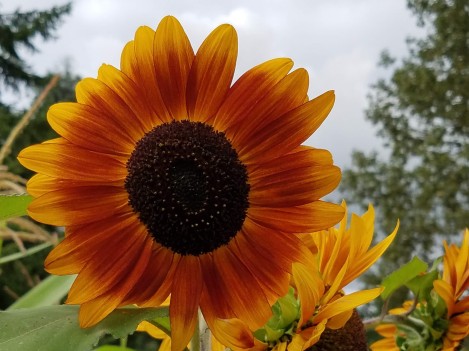 My husband and I visited our son and daughter-in-law, who live in Oregon, earlier this summer. At the edge of their garden, my son planted a row of gorgeous sunflowers, which I wanted to photograph.

As I walked past the corn stalks planted next to the sunflowers, I remembered a scene I witnessed last summer that I cannot expunge from my memory, no matter how hard I try.

I find myself now, a year later, turning this scene over and over in my mind, trying to make sense of the carnage I witnessed there, in the sunny corn patch.

My son and his wife garden organically, in an earnest, no-chemicals-added sort of way, so it is no surprise that bees of every stripe are frequent visitors to their garden. I have seen honey bees, sweat bees, and no less than four species of bumblebees frequenting their flowers and vegetables.

On this day, I saw, to my horror, a yellowjacket eating a honeybee which had stopped to take a breather from her incessant nectar-gathering on a broad green leaf of corn.

As it turns out,  we notice yellowjackets mostly in the late summer, when dry conditions reduce the number of plant-eating insects they typically prey on.

They visit our soda bottles and hamburgers and generally make a terrific nuisance of themselves. Honeybees serve as a source of fresh meat for the more aggressive wasps during this season.

Beekeepers are well aware of yellowjackets’ predation on honeybees. A small or weak colony of honeybees can be decimated in a matter of hours by a yellowjacket attack.

Now, I am certainly not going to tell you that I was sentimental about watching a wasp eating a bee. Even though I realize honeybees are beneficial pollinators, producing a variety of products used by humans, including honey, beeswax for candles, and lip balm that is so much more palatable than those made from petroleum products, they are still, at heart, bugs who sting.

Moreover, I realize that predators capturing and eating prey are an inherent part of nature. I, myself, am a predator, eating halibut piccata and seafood gumbo, among other delicious animal-based foods.

Watching the yellowjacket eat the bee was a matter of fascination, rather than an affront to my senses. When I looked closer, I could even see the wasp licking the sweet honey the bee disgorged as she was being consumed.

Then I saw something that, for some reason, went a step too far and turned my amazement into revulsion.

All three insects were, by the way, very much alive, waving their appendages with varying degrees of vigor as I watched the scene in horror, my face no more than three inches from the stage where the actors played out their hideous scene of life-and-death struggle.

Is there no action, I wondered, too depraved for insects to undertake? No place where the line is drawn, no behavior too obscene?

How can the same Creator responsible for glorious rainbows, magnificent sunsets, and adorable fluffy baby penguins, I wondered, allow such a casually gruesome and vicious scene as the one I witnessed in the sunny garden?

And then, just last week, I read a snippet of a poem by Mary Oliver that answered my question and made the whole situation clearer to me.

“But tell me,” Mary asks, “if you would praise the world, what is it that you would leave out?”

Yes, who am I, a retired high school teacher, to think I should have the authority to decide who is in and who is out? Which creatures meet my exceedingly stringent standards and get the OK for existence and which ones are just too unattractive, either in actions or appearance? But how absolutely human of me to want to try.

Of course, I think I am qualified to recognize the attributes for a more appealing version of life. We humans have been categorizing, labeling, classifying for millennia. It’s what has made us so successful, evolutionarily speaking. We’re good at it. It’s how we understand the world.

I do not, unfortunately, have the omniscience needed to make those heavy decisions (although it certainly would have come in handy during my teaching years). I only think I know everything; in reality, I am sadly lacking large areas of knowledge.

The knowledge we possess, in sum, is minuscule compared to that which we don’t know. We see the world only darkly, with thick wool covering our eyes.

I believe it is our calling, during our lighted seasons, to try to lift the wool and see our universe a speck more clearly. Some of us get distracted with all of the flash and frenzy the world has to offer and forget to even look.

I myself need many reminders to pay attention, to think about what theologian Paul Tillich called our “ultimate concern“. Reminders such as the sight of a hornet eating a wasp eating a bee.

And so I remember, for the time being, to consider important matters, and that I do not, regrettably, possess unlimited knowledge, and I must accept life as it is, rather than as I want it to be.

I remember (reluctantly) to distance myself from the distractions, the enchantments, the flash. I read serious books and think deep thoughts about existence. But, oh, the pizzazz of a sunflower in the late afternoon sun!

I am linking with Random-osity for Communal Global, Abounding Grace for Gracefull Tuesday, Mary Geisen Tell His Story, Bethere2day for Wordless Wednesday, and InstaEncouragements.