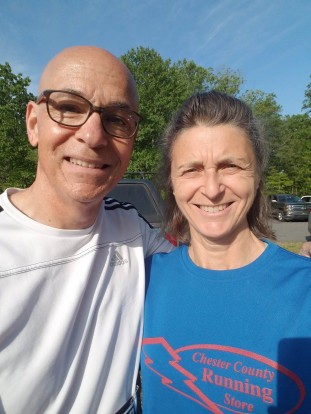 On Saturday my hubby Bill and I traveled to New Bloomfield, Pennsylvania where the very pretty Little Buffalo State Park is located to run the second annual Joggin 4 the Noggin 5K. It was our third race in three weekends, and my favorite of the three.

I selected this race for two reasons: it supported a great cause, brain tumor research, and it is run on a variety of surfaces – dirt, grass, stone, and pavement, which I enjoy.

We parked in the parking lot adjacent to the pavilion where registration was being held and walked across a small bridge where children were splashing in the stream to get our race bibs. I was surprised at the number of people who were already present at registration since we arrived almost an hour before the race start.

I soon realized there were many teams of runners present, each representing an individual battling brain cancer. The support for this fundraiser was incredible. 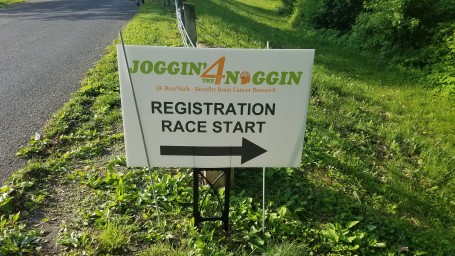 Because we registered late, we were not guaranteed a race shirt, but there were plenty of shirts available for late registrants. Bill and I each got our preferred size. The shirts are the nice, soft, but cottony kind that I will wear rather than donate.

We spent a little time walking around exploring, did a very brief warm-up jog, then headed back to the pavilion to hear the pre-race instructions.

As the woman in charge of the race spoke about the pediatric brain cancer and glioblastoma research this fundraiser supported, her voice began to catch. You could tell this cause was important to her. I could feel a lump forming in my throat and tears pooling in my eyes in response.

She managed to keep her emotions in check (and so did I) and delivered the rest of the pre-race talk, then we lined up in the parking lot for the beginning of the race. 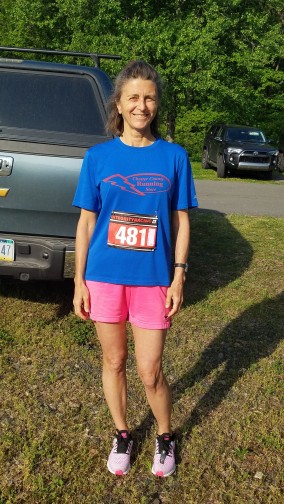 The race director and several children counted down from five and we were off. The course began by crossing the parking lot, traveling up a small gravel road that circled a swimming pool, then onto a dirt trail which ran parallel to the lake, the centerpiece of the state park.

The dirt trail through the woods next to the lake was my favorite part of the race. It lasted for about 3/4 of a mile, was slightly downhill, and was totally shaded. It was also wet in some places.

You could tell whom the trail runners in the race were – they splashed right through the puddles with total disregard for their shoes and shins. Road runners tended to tiptoe around the water.

Running on the trail was slightly congested at first. I was content to allow a woman pushing a youngster in a jogging stroller run interference for me. Incredibly, the mud and water didn’t seem to faze her at all. She would shout “Coming through! Make way!” and pass people on the trail. I was happy to follow in her wake. 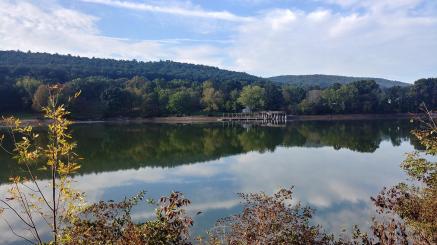 We exited the woods and ran across the dam breast at the first mile marker, ran for a while on a gravel road, then entered a grassy trail that was mostly uphill for about half a mile. Even though I took two brief walk breaks on the grass, I lost the woman with the stroller on this part of the course. Pushing a five-year-old in a jogging stroller uphill on grass is not for the faint of heart.

At the second mile marker, we exited the grass trail onto a road that ran along the other side of the lake. Normally, I do not like to run races on roads which are not closed to traffic, but in this case, traffic was not an issue at all. The road shoulder was very wide to accommodate parking for fishermen (and women) and I honestly don’t remember seeing even one car during the time I ran on the road.

The road portion of the race was by far the easiest. There was initially a very slight uphill, followed by a very slight downhill, and the remaining half mile was completely flat. 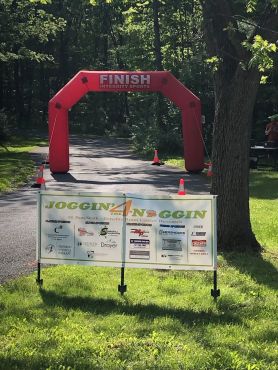 At mile three, we turned off the road, onto a gravel park road and saw the finish line. I crossed the finish line and walked for a while to catch my breath.

My time was slower than last week, but the course was harder, and I felt much better than I had in either of the previous two races. 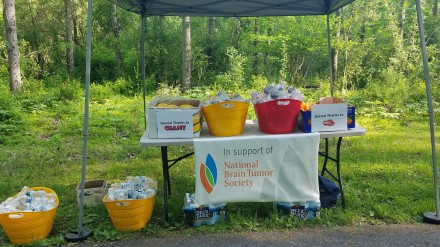 The post-race food consisted of water, clementines, and bananas. Not great, but delivered directly to the racers by some very enthusiastic children. Other food was available for purchase from a food truck set up near the registration pavilion.

I wound up winning my age group and Bill was second in his.

The race director asked us for feedback on the race. She wants to make this race grow in order to raise more funds for brain tumor research. The positive aspects of this race far outweigh the negative.

The only suggested improvement I have is maybe to search out more post-race food donations from sponsors and discontinue the use of the food truck. I didn’t see anyone buy anything from the food truck, so I am not sure it was worth his while to set up a generator and prepare to serve food in a state park.

I will definitely put this race on my calendar for next year. If you plan to be in Pennsylvania the third weekend in May, the trip to Little Buffalo State Park to support this important cause and this fine race is worth the drive.

I am linking up with Running on the Fly and Confessions of a Mother Runner for their Weekly Rundown, Random-osity for The Good, The Random, The Fun, Coach Debbie Runs  for the Coaches’ Corner, and Kooky Runner for Tuesday Topics.