“And now faith, hope, and love abide, these three; and the greatest of these is love”.-1 Corinthians 13:13 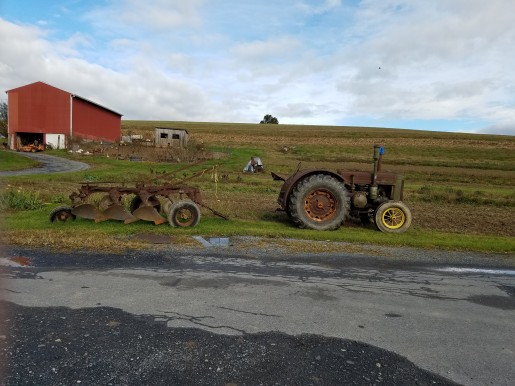 I am doing very short, slow runs these days. My hip is still hurting from my last marathon, and I have to accept the fact that it may be from overuse. I was talking to a former student of mine, who is now in the medical profession, at Body Pump class yesterday. She asked me to describe the injury, which I did. She nodded. “You may have to give it a rest“, she said. Not what I wanted to hear.

My favorite run right now is a four-miler, which begins at the local rec center. It takes me out in the countryside on roads with very little traffic. I have the time and the opportunity to let my mind wander as I shuffle along.

For some reason, the verse from 1 Corinthians (above) was on my mind as I ran before class. I thought at first it was because I had discussed it with my oldest son not too long ago. I realized with a start that just that morning I read three stories – one dealing with faith, one with hope, and one with love. No wonder this Bible verse was rattling around my brain.

You may find a turtle an unlikely symbol for hope, yet it is. Specifically, a Giant South American River Turtle. According to Discover magazine, this 200-pound behemoth nests in the Amazon River Basin, mostly in Brazil.

The turtle was nearing extinction 40 years ago, due to overhunting and egg-harvesting, when a win-win alliance between local residents, universities and government agencies was formed to rescue the reptile.

Community members are paid the equivalent of approximately $100 per month to guard the beaches where turtles nest. Poaching and egg-harvesting have plummeted at the protected beaches and the turtles are experiencing an amazing resurgence in numbers. The program is so successful that not only have the turtles made a comeback, at protected beaches iguanas, migratory birds, and fish populations have increased, too. In contrast, at unprotected beaches, poachers gathered 99% of the turtle eggs.

This program has brought hope for the future of the Giant River Turtle species and the  ecosystem in general.

The improbable, yet true, love story I read about in The Telegraph spanned decades. Anna and Boris met in pre-World War II Russia at a Young Communists meeting where Boris was the speaker.

They fell in love shortly before Boris was drafted into the Russian army. During the war, Anna waited eagerly for Boris’ visits when he came home on leave. They married in 1946, shortly after the end of the war, but while he was still in the Army. The couple got to spend three glorious days and nights together before Boris had to return to his unit.

When he was discharged, he returned to their village, but Anna was gone, disappeared into one of Stalin’s Siberian gulags. Her family had fallen out of favor with the Communist Party. Boris searched for her everywhere, but to no avail.

Eventually, under pressure from their families, both Boris and Anna remarried. In time, their respective spouses died and, after the demise of the Soviet Union, Anna was free to travel once more.

She traveled to her hometown to see her old house once more. Coincidentally, Boris returned on the same day to visit his parents’ graves. As he got out of his car in front of Anna’s house, she could scarcely believe her eyes. She cried tears of joy. Boris ran up to her crying, “My darling, I’ve been waiting for you for so long. My wife, my life…”

Boris convinced Anna to marry him again. “She was the true love of my life“, he said. They had never forgotten each other, even after 60 years.

I love the concept of pennies from heaven. I have written about them before. My theory is that God is constantly throwing pennies to us. Riches beyond our wildest imagination, a penny at a time. We must pay attention in order to find them. The following story, from atimetolaugh.org, reinforces that concept.

A couple was spending the weekend with the husband’s wealthy employer when he invited them out to dinner at a very exclusive (and expensive) restaurant. As they walked from their car to the restaurant, the executive suddenly stopped, looking down at the sidewalk.

The couple, bewildered, could not see what the man was looking at, so they waited for him. He eventually bent down and, smiling, picked up a tarnished penny lying on the sidewalk.

The wife, intrigued, asked her husband’s employer at dinner why he had stopped to pick up a penny. The employer reached in his pocket, pulled out the penny, and showed it to her. He asked her to read what it said.

“United States of America“, she replied.

“No, keep reading some more.”

The boss explained that if he truly trusted in God, the name of God is holy, even if it is written on a common penny. In fact, it is written on every coin made in the United States, but we very seldom notice it.

“God drops a message right in front of me telling me to trust Him? Who am I to pass it by?” he asked.

We can use a simple penny to check our trust in God at each moment. Think of the penny if you are worrying needlessly about something over which you have no control. Think of it as God’s way of starting a conversation. Luckily God is patient and there are lots of pennies. You might find them anywhere. Even on a run. Have faith.

Now faith is the assurance of things hoped for, the conviction of things not seen – Hebrews 11:1

I am linking with Abounding Grace for Gracefull Tuesday, Purposeful Faith for RaRa link up, Char at Trekking Thru, Patty, Erika and Marcia for Tuesdays on the Run, Shank You Very Much for Dream Team, Holley Gerth for Coffee for Your Heart, Meghan Weyerbacher for Tea and Word, Shelbee on the Edge for Spread the Kindness, Mary Geisen Tell His Story, Kristin Hill Taylor for Porch Stories, Reflections From Me for A Blogging Good Time, Random-osity for Little Things Thursdays, It’s a Small Town Life for Thankful Thursday, Be Thee Inspired, and Bethere2day for Wordless Wednesday on a Tuesday.