Economics and the Story of Ruth Collide

I am currently reading two books. This is a pattern I have often followed. I will read part of one book until I grow tired of it, then switch to the other. Back and forth, until I finish one or both books. I have fairly eclectic tastes when it comes to reading; there is a variety of genres on my bookshelves and e-reader. 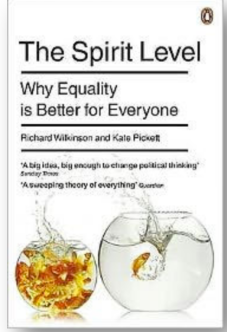 The first book I am reading is The Spirit Level by Richard Wilkinson and Kate Pickett. It is a book on economics – very unusual for me. I tend to gravitate more to the hard sciences than the social ones, and even though I was required to take calculus in college (best part of calculus class – I met my hubby), math is not my strong suit.

The premise of this book is that societies are stronger and function better when the income disparity between the top and bottom earners is less pronounced than it currently is in the United States. There are many graphs and statistics used to make this point

One graph in particular stands out. It’s a graph of the income inequality vs. the number of social problems in various developed countries. Not surprisingly, the two variables have a direct relationship; as one goes up, the other rises also.

The surprising thing is that the US is not even on the line. We are so far above all the other countries studied, we appear to be an outlier. Countries with low income inequality and low social problems: Japan, followed by the Scandinavian countries. On the other end of the scale: US (by a mile), followed by Portugal and the UK. The authors point out that wealth is not a good indicator of social problems; income inequality is.

It’s a very well-researched book but something of a snooze. It’s not that I don’t care about the topic. I do. It’s just that it doesn’t make for a spellbinding reading. Thus the second book.

The second book is Hallelujah Anyway: Rediscovering Mercy by Anne Lamott. This author was recommended to me by a blogger I follow. I am so grateful to her for the suggestion. I loved this book. My only regret was that I bought it for my e-reader. I wish I had bought the paper version of the book so that I could go back and highlight sections to reread and think about some more.

Mercy is a topic I think about often. Here is a wonderful quote from Lamott on mercy: “Forgiveness and mercy mean that, bit by bit, you begin to outshine the resentment.” I love this concept because it hits so close to home. Way too often, my first inclination is toward resentment when I perceive a slight. Eventually, my better nature takes over, and I get to the point of forgiveness, but sometimes it takes a while.

The part of the book I loved most dealt with the story of Ruth from the Bible. Ruth was a young Moabite woman who married a Jewish man. Ruth admired and loved her mother-in-law, Naomi. After Naomi’s sons, including Ruth’s husband, were killed, Ruth followed Naomi back to Israel and found work as a gleaner in the fields of a wealthy man named Boaz.

Apparently, Boaz took the words from Leviticus seriously “When you reap the harvest of your land, do not reap to the very edges of your field or gather the gleanings of your harvest. Leave them for the poor and for the foreigner residing among you.”

Lamotte sees this system of gleaning as the ultimate rejection of trickle-down economics, a much more humane and merciful way to live than “we’ll collect everything and keep the best on top, and maybe some will spill over for the bootstrap people to fight over.”

She finds goodness and hope in small gestures like “sharing some of your food, picking up litter, helping search for the lost, welcoming home the found.” These are the seeds of mercy and love.

I get the same message, then, from both books. One says it with charts and graphs, one with a story from the Bible. Be kind and generous. Have mercy on others, since great mercy is shown to you. Don’t take more than your share. Help others who are in need.

I love it when science (even social science) and religion converge.

I am linking with My Little Tablespoon and Laughing My Abs Off for their Fab Finds Friday and Anna Nuttall for her Bloggers Link Up.