When I saw that this month’s word was “dedication”, one picture came to mind:

Or maybe this one: 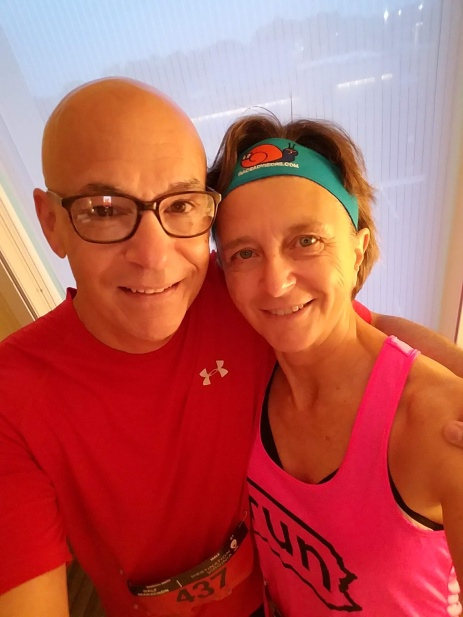 Or….well, you get the picture.

This summer will be the 40th anniversary of our wedding for Bill and me. 40 years of wedded bliss! Well, maybe not every second. We have had our ups and downs like any couple who has accumulated a lot of years together, but when I think of dedication, I think of us.

It wasn’t always that way. It used to be that hubs liked to golf and I liked to run. We each kind of did our own thing. Oh, Bill ran a little bit. He did three or four miles a few times a week. We usually did not run together, and he never raced.

When our kids were younger, raising them was something we did together, but after all the kids left home, we kind of grew apart. We realized that we had to do something drastic to boost our relationship. I began to take golf lessons and Bill started to run with me. I lured him into a 5k by promising him free beer and pizza after the run. Unfortunately, his stomach was too shaky after his first race to enjoy the beer and pizza, but luckily, he kept running, because I was a terrible golfer. 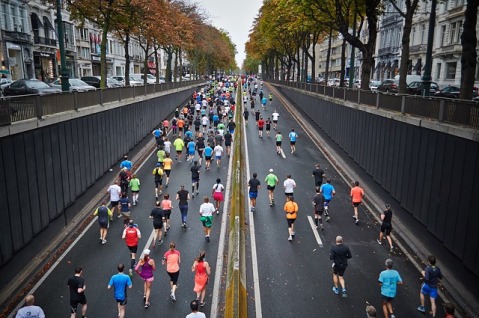 5k’s became 5 milers, 10 milers, and half marathons. Then we saw the movie “The Spirit of the Marathon” together. Bill asked me if I would run a marathon with him. I said “Of course!“. He said “No, I mean every step of the way.” I again said “Of course“, and our running partnership began in earnest. We trained for and ran the Richmond marathon. Together. We both have an affinity for that city’s beautiful architecture, fabulous restaurants and lively running scene. 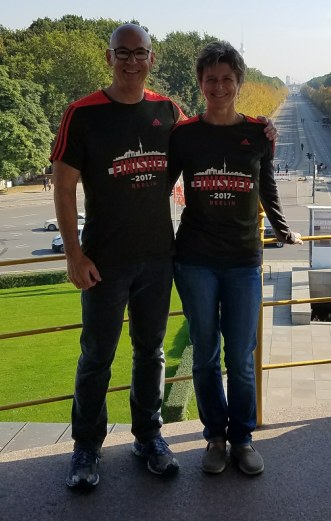 Running is now the centerpiece of many of our vacations. Within the last year, we have done everything from the Berlin (Germany) Marathon in September to a 24 hour relay in Danville, PA on Mother’s Day weekend.

Running a tough race with the person you love most in the world makes the miles easier and more fun. I realize how incredibly lucky I am. No one knows me better than Bill and vice versa. We know when to talk to each other to make the miles go by faster and when to shut up. I once even asked Bill to sing to me during a particularly tough patch. He started singing “Happy birthday to you…“, I cracked up, and the rough patch was over.

Thanks to Deb from Deb Runs for giving me the chance to think about dedication. When I think of dedication, I think about running. And Bill.

I am linking up with Deb Runs for her Wednesday Word and Eclectic Evelyn for her Words on Wednesday link up.